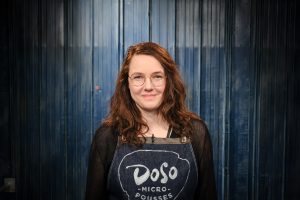 Allow me to introduce myself. My name is Vicky, and I’m the founder of DoSo microgreens. I’m also a huge foodie and have always been interested in the agro-food field. Following this passion, I studied professional cooking at ITHQ in 2005 and then worked in the restaurant field shortly thereafter. I started growing microgreens and sprouts from home (in Montreal at the time), since I was super unsatisfied with the retail market’s lack of freshness and diversity. So I tried a few things out and, soon enough, loved what I was seeing. Friends and family started asking me for bunches of plants every week, and voilà, this project began. However, DoSo’s flagship microgreen product — MICROGARDENS — had not yet come into fruition.

This would be in 2013, when running a market test of the Val-David Christmas market. I decided to try offering microgreens directly in their planters, ready to be harvested. Things sold well, and I received some promising comments and a sizeable demand. So the microgarden became our company’s main product. During this time, I graduated from the University of Quebec – Montreal in gastronomical management and sociocultural practices. After this, I continued my studies, earning a degree in administration from HEC Montreal.

So there’s a short overview of my background, which, truth be told, is much less straight and narrow. Entrepreneurship is an amazing adventure when we dare cast our fears aside and open ourselves up to others.

The CLD des Jardins-de-Napierville contributed a lot to our takeoff, in 2015, and allowed me to take part in a program that supports independent workers. This support allowed me to put in place my business foundations before bringing in employees. Then in 2016, we qualified for the MAPAQ PROXIMITY program, which allowed us to create our brand image with G l’agence as well as our marketing plan. Finally, in 2018,we qualified for a grant to establish a Financière Agricole Canda company. Multiple partners allowed us to make the best decisions and propel our  company forward.

DoSo Microgreens was legally incorporated in 2017 and became a family company in 2018.

So far, including myself, there are five of us:

And that’s it! This is the team behind your products.

We are happy to help put life into your dishes!